There are increasing social pressures on the agricultural use of salt-affected reclaimed tideland (RTL) for the cultivation of other crops except for rice. Crop suitability for RTL has conventionally been evaluated using soil salinity alone without consideration of soil texture and water salinity. In this study, the suitability of 10 crops for 12 RTLs under national government’s management was evaluated using soil and water salinity as well as soil texture. The crops include barley (both cereal and forage) (hordeum vulgare), wheat (triticum eastivum), paddy rice (oryza sativa), maize (forage) (zea mays), beet (beta vulgaris), celery (apium graveolens), spinach (spinacia oleracea), broccoli (brassica oleracea var. italic), and tomato (solanum lycopersicum). The results showed that barley and wheat are most suitable winter crops for all RTLs and beet, celery, and maize are more suitable than others as summer crops. The suitability of rice, which is widely cultivated in all RTLs, was not as high as expected in some RTLs, suggesting that it may be possible to consider other crops as alternative summer crops to rice. By using not only soil salinity but also soil texture and water salinity as parameters for crop suitability evaluation, it was possible to recommend suitable crops for each RTL of which soil texture and soil and water salinity differ.

In South Korea, reclaimed tidelands (RTLs) have been constructed to create new land for enlarging arable land to ensure food security, and the area of RTLs is estimated to be 186,639 ha, which is equivalent to 11.7% of total arable land and 22.1% of rice cultivating land in 2018 (MOAF, 2019). The RTLs are often located in lowland with high groundwater level and high salinity, which inhibit growth of many upland plants (Lee et al., 2003a; Huang et al., 2008). In RTLs, rice (Oryza sativa L.) is commonly cultivated over other crops for two main reasons: firstly, rice is the most important staple food and secondly, rice is cultivated under waterlogged conditions and thus may has less salt stress due to leaching of excessive salt below rooting zone during growing seasons (Abrol et al., 1988; Lim et al., 2020). However, with reduction of rice consumption, there are increasing social pressures on the multi-purposes use of RTLs including production of other cereal and food except for rice (Kang et al., 2019).

However, in salt-affected soils including RTLs in South Korea, not only soil salinity but also water salinity should be considered to evaluate crop growth and suitability in the soils (Eynard et al., 2005; Lim et al., 2020) as water salinity directly affects crop growth and also determines leaching requirement for the growth of a certain crop species to maintain soil salinity below a threshold level (Skaggs et al., 2012; Cucci et al., 2019). For example, even rice, which is widely cultivated in salt-affected soils, is known to be susceptible to water salinity stress; e.g., rice yield decreases when electrical conductivity (ECw) of irrigation water is > 2 dS m-1 and no yield is expected when ECw is 7.6 dS m-1 (Maas and Hoffman, 1977; Lim et al., 2020). In addition, as many upland crop species are sensitive to excess moisture stress and poor aeration, soil textures of the RTLs may be another barrier for cultivation of divergent crop species (Yamauchi et al., 2018).

Therefore, it is highly necessary to take water salinity and soil texture as well as soil salinity into consideration to evaluate the suitability of crop cultivations in RTLs soils. In this study, to provide a comprehensive methodology for selection of crop species suitable for RTLs and to recommend crop species suitable for 12 RTLs under national government’s management, the suitability of crop species to the RTLs was evaluated using soil and water salinity and soil texture. 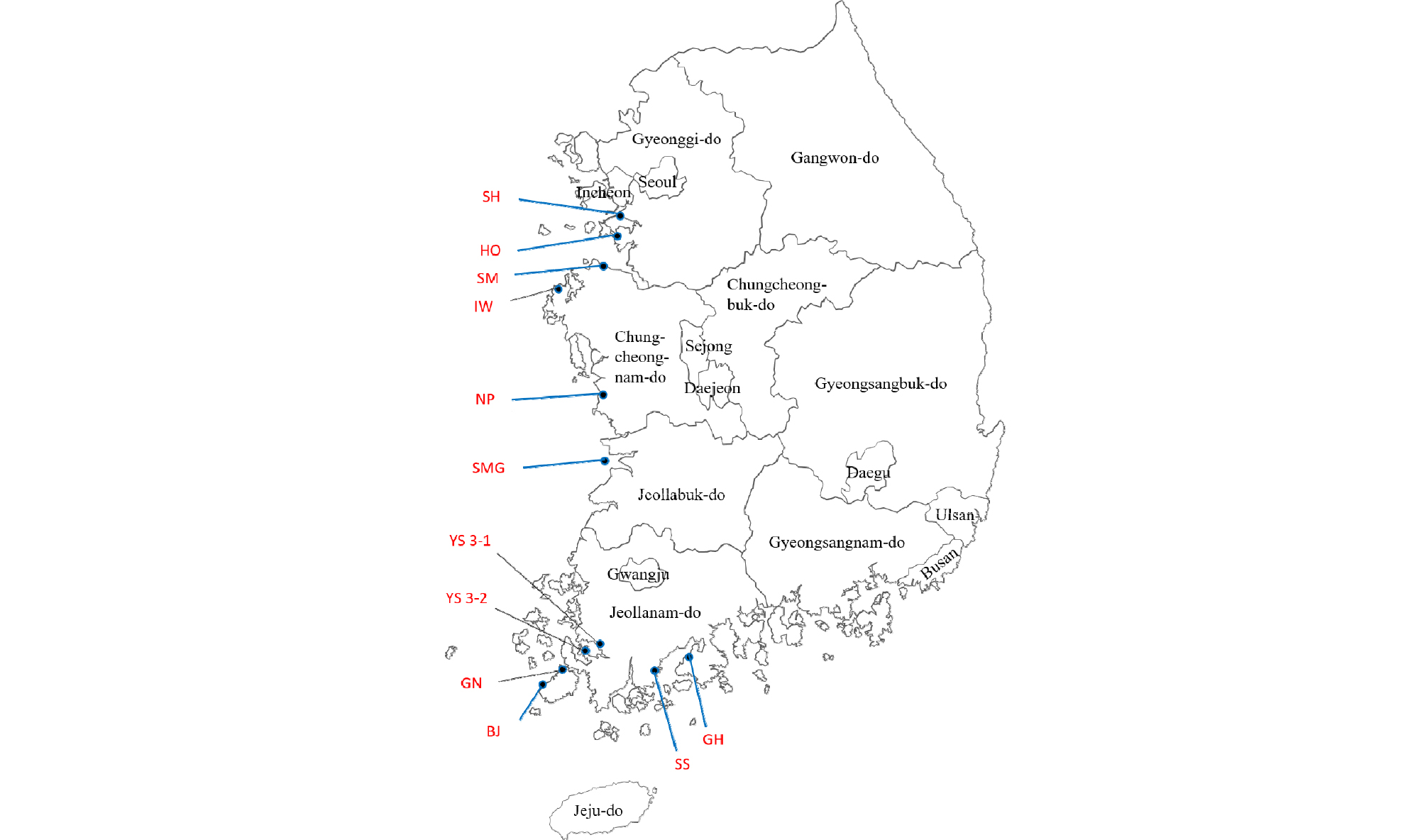 Locations of the study reclaimed tideland (RTL) (n=12). Information including land area, number of soil sampling, and water sampling locations as well as the code names of the RTLs are provided in Table 1.

Analyses of soil and water samples Soil samples were air-dried, passed through a 2-mm sieve, and used for analyses. Particle size distribution was determined using the pipette method (Gee and Bauder, 1986). For measurement of electrical conductivity of saturated soil paste (ECe), approximately 500 g of soil samples were placed into a plastic container, and distilled water was added until the soils reached a condition of complete saturation as described in the USDA Handbook 60 (US Salinity Laboratory Staff, 1954; Park et al., 2019). The extracts of saturated pastes were obtained under vacuum using a vacuum extractor (SampleTek 24VE, MAVCO INDUSTREIS, Inc., Kentucky, USA), and EC was measured using a conductivity meter (Orion 3 STAR, Thermo Fisher Scientific Korea, Seoul, Korea). Water samples were also analyzed for ECw using the conductivity meter.

For soil texture score, proper soil texture group for cultivation of crop species provided by NAS (2017) was used (Table 3); specifically, if the soil texture of a RTL is within the texture group, 20 was given and if soil texture is out of the texture group, the RTL was scored 0. For soil salinity score, the database of Food and Agriculture Organization on yield changes with ECe (Table 4, Abrol et al., 1988) was used. Using the database, the relationship between relative yield (Yr) of a specific crop and ECe (Table 4), an equation, Yr = A ‒ ECe × f, where A is y-intercept and f is a crop yield reduction coefficient, was developed for each crop (Fig. 2 and Table 5). When ECe is the same as or below the threshold ECe, Yr was assumed to be 100 that is equivalent to the perfect score (40) for soil salinity; and when ECe is above the threshold ECe, Yr (<100) is obtained from the equation and the salinity score is computed as 40×(Yr/100). Water salinity score was developed as the same as the soil salinity score. Total suitability score was calculated as the sum of the scores of soil texture, soil salinity, and water salinity.

Table 4. Soil (ECe) and water (ECw) salinity at a certain relative yield of crop species: example of the selected 10 crops.

Table 5. Regression equations for the relationship of relative yields (Yr) of the selected 10 crops with soil (ECe) and water (ECw) salinity (x variables) using the data in Table 4.

Relevant regression analyses are shown in Fig. 2.†Application of the equations are described in Table 2. 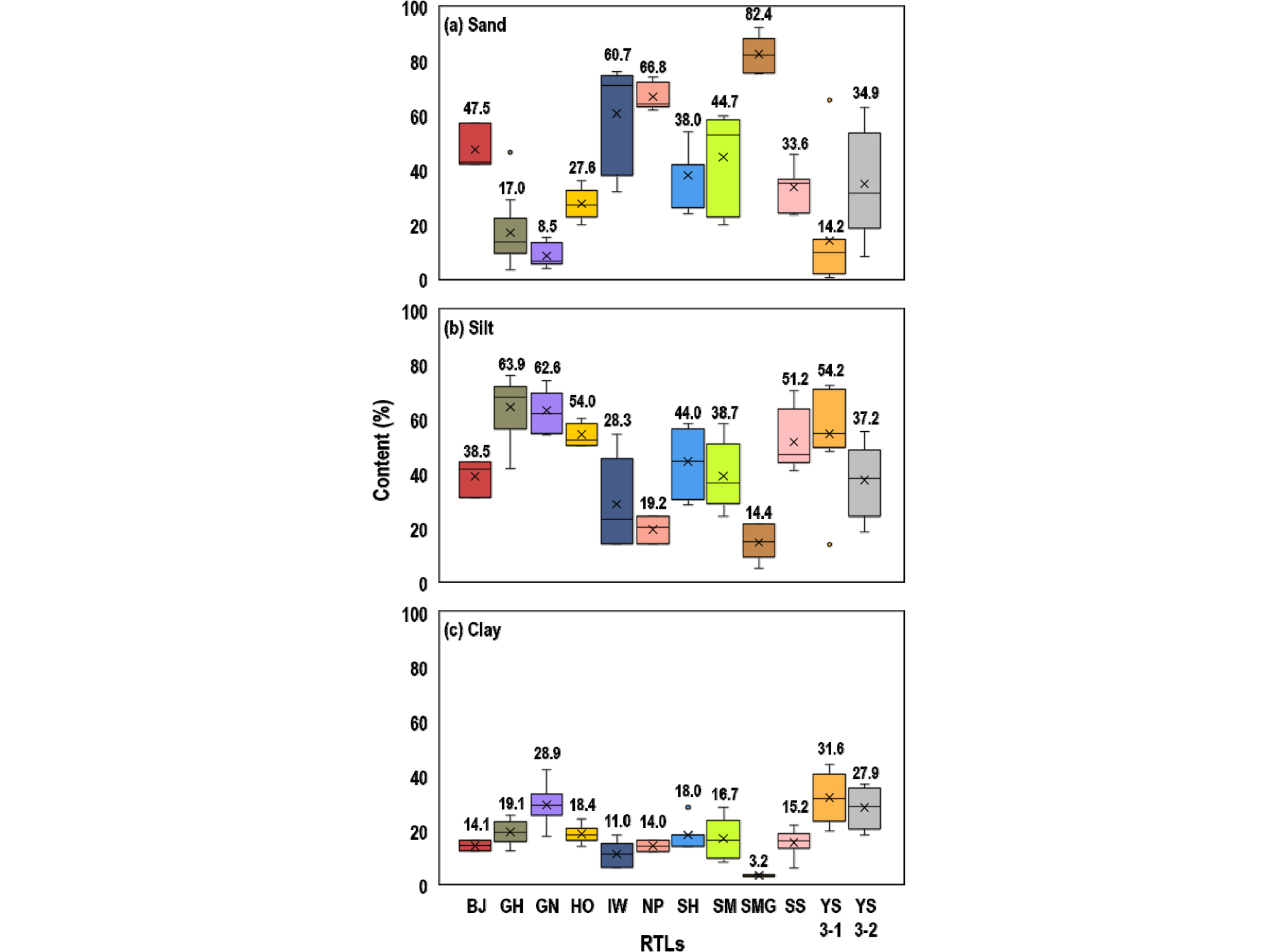 Box plots of the distribution of (a) soil salinity (ECe) and (b) water salinity (ECw) of the reclaimed tideland (RTL) soils. Average values are depicted for each RTL. Boxes represent interquartile ranges (IQRs) and horizontal lines within boxes indicate median values. The upper and lower whiskers indicate 7 percentile plus 1.5 IQR and 25 percentile minus 1.5 IQR, respectively. × is average value.

The average ECw ranged from 1.1 dS m-1 for SS to 36.0 dS m-1 for SH (Fig. 4b). Irrigation water quality is evaluated with many parameters including ECw, sodium adsorption ratio, and specific ions concentration such as Na, Cl, and B (Ayers and Westcot, 1985). Based on ECw, the degrees of the restriction on use of the water can be classified into three categories; none restriction for ECw <0.7 dS m-1, slight to moderate degree for ECw 0.7 - 3.0 dS m-1, and severe degree for ECw >3.0 dS m-1 (Ayers and Westcot, 1985). Therefore, according to the classification, agricultural water in BJ, GN, SM, SS, and YS 3-2 can be used for irrigation with slight to moderate restriction; whereas for the others, severe restriction is required. Taken soil and water salinity together (Table 6), GH is expected to be more suitable for crop growth than other RTLs, and soil salinity may be the limiting factor for crop growth in BJ, GN, SM, SS, and YS 3-2, whereas water salinity for NP, SH, and SMG and both soil and water salinity for HO, IW, and YS 3-1.

Crop suitability By using not only soil salinity, but also soil texture and water salinity as scoring parameters, it was possible to make sophisticated score being different among crop species. For example, in GH, all the crops had perfect score (40) for soil salinity, but scores for soil texture and water salinity differed, resulting in different total score (Table 7). If soil salinity was used as single parameters, therefore, it would result in the same suitability score for the 10 crops. Overall, among the 12 RTLs, BJ, GH, and SM had relatively higher suitability score than others due to lower ECw (for BJ and SM) or lower ECe (for GH); whereas HO and SM, which had higher ECw as well as YS 3-1 with moderate ECe and ECw but finer texture (silty clay loam) showed the lower score compared to other RTLs (Table 7).

Among the crops, barley and wheat (winter crops) were high ranked due to their high tolerance to soil and water salinity (Table 4) as well as wide suitability to soil texture (Table 3). Compared to other summer crops, when soil texture was suitable, beet, celery, and maize were high ranked due to their salinity tolerance at a higher salinity range (Table 4). Though paddy rice is currently widely cultivated in the 12 RTLs under waterlogged conditions through continuous irrigation that allow leaching of excessive salts during rice growth (Lim et al., 2020), the suitability score was <70 in nine RTLs except for BJ, GH, and SM mostly due to high ECe and ECw. As shown in Table 4, rice is not tolerant to salinity stress, and thus rice yield is reported to decrease ECe above 3.0 dS m-1 and loses 50% yield at 6 - 7 dS m-1 (Maas and Hoffman, 1977; Abrol et al., 1988). For RTLs in South Korea, Lim et al. (2020) reported that white rice yield decreased with increasing salinity in an exponential manner.

As rice is a staple food in South Korea, the important role of RTLs to produce rice should not be ignored, and thus it is suggested to cultivate rice in three RTLs (BJ, GH, and SM) with high (>70) score for rice as a summer crop (Table 7). However, in the remaining nine RTLs, other crops such as beet (BJ, IW, NP, and YS 3-2), celery (BJ, IW, NP, and YS 3-2), and maize (GN, SS, and YS 3-1) are suggested as summer crops. For winter crops, barley (including forage) and wheat are suitable for all the RTLs.

This study shows that not only soil salinity but also soil texture and water salinity are necessary to be considered for the evaluation of crop suitability for cultivation in RTLs. Unexpectedly, the suitability score of rice was low for some RTLs and many other crops was ranked higher than rice. Therefore, in such RTLs, it may be possible to consider other crops including beet, celery, and maize as alternative summer crops to rice. For winter crops, barley and wheat were highly suitable for all RTLs. In addition, it may be also possible to increase crop yield by ameliorating soil texture, soil salinity, and water salinity for the target crops. However, in this study, as crop suitability was evaluated using average data of soil texture and salinity from selected fields in each RTL, it is necessary to use the data set specific to a field to recommend suitable crops for each field considering heterogeneity of soil properties among fields in a RTL. Furthermore, as soil and water salinity may decrease with time through natural and artificial desalinization, crop suitability assessment should be updated in the future to reflect changed soil and water salinity.

This work was carried out with the support of “Cooperative Research Program for Agriculture Science and Technology Development (Project No. PJ0138732020)”, Rural Development Administration, Republic of Korea.

Go to ContentsGo to Main NevigationGo to Footer